As hikers with a mission, finding a hiking role model who is “walking the talk” is heartening. Reprinted here and edited with permission is the essay that first introduced me to my new friend and role model, Nancy King. I recommend you read it as originally written and published in her YourLifeisaTrip.com.

Turning 85 spun my heart and soul and spirit into a maelstrom of doubt, worry, fear, dread.  Somehow 85 seemed a whole lot older than 84. Could I keep hiking as I’d been doing? To me, it’s more than exercise; it’s being in nature, listening to the sounds of birds and swishing tree leaves, smelling the earth. For me, hiking equals healing. 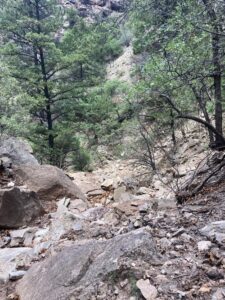 The last time I felt this way was in 2006. I had recovered from another bout of hairy cell leukemia first diagnosed in 1985 and healing from the after-effects of chemotherapy. After working to regain my strength and endurance I decided to celebrate my 70th birthday by joining the Sierra Club. By becoming a “serious” hiker, I hiked with groups at least twice a week between eight and 17 miles. Elevations ranged  from six to 13 thousand feet, and  elevation gains from a few hundred to over thirty-five hundred feet.

Hiking During the Pandemic

Then came the pandemic. Suddenly no one wanted to hike in groups. I had hiked a bit by myself before joining the Sierra Club. Now I had two choices: not hike or do it alone. I chose to ignore fears and friends’ worries.  I began hiking three times a week on a little-used steep trail that nourished my mind, body, and spirit. 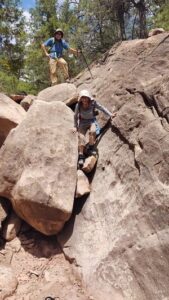 As vaccinations encouraged more in-person interaction, I reconnected with SK, a man who had previously led me on little-known and challenging hikes. The scenery made me gasp with awe, trails that left me wondering if I could finish the hike, and cacti that reached out and grabbed my socks. When I was cowed by daunting trails in the past, I trusted in his confidence that I could do the hike in reasonable time with good energy. Now I worried that turning 85 would put an end to my spectacular hiking days.

As the pandemic eased, I began to hike with SK a few times. Mostly I continued going by myself, taking note of my speed as a way to counter worries about being too old. He and I did some shortish, challenging hikes, which boosted my confidence, but the number 85 still spooked me. No amount of talking to myself made the fear that I was now old go away. 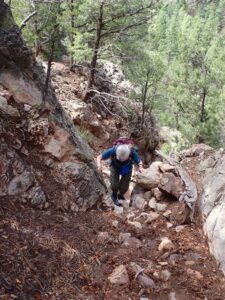 SK and I had hiked in an area called Deer Creek many times, When he posted a new one there I immediately signed up, thinking it would be similar to others we’d done. Wrong! The first clue that I was on a more arduous hike came when the three of us — SK, Tom, and I — went past the flat trail. We began climbing up what is euphemistically called a trail but is actually a steep incline of washed-out drainage areas. We paid close attention to where we put our feet to avoid slipping on loose rocks and sandy scree. And catching our boots on barely covered roots.

I breathed deeply, shoring up my confidence as we bushwhacked down a steep canyon. Then we made our way in an arroyo or dry river bed filled with boulders and downed trees. From there we headed up to a junction where we had a choice: take the easy trail back to the car or head up a canyon that would eventually take us there. Being tired, I was ready to take the easy trail but SK and Tom were clearly excited about canyoning. As a kid I used to love scrambling up and down boulders, so I innocently said, “Sure, let’s canyon.” I had no idea what that actually meant.

For the next few miles, we scrambled up, down, and around various obstacles. Each one demanded that we figure out how to deal with it. When we came to a rock wall that looked thoroughly intimidating and impenetrable, I was sure I couldn’t do it. SK suggested an alternative path, but my pride was stronger than my fear. I refused to go the easier route. SK found his way up the wall, told me to throw him my pack and poles and copy his route. Suddenly my panic disappeared. In its place was the joyful feeling I had when I was much younger, rock climbing up challenging walls. Grinning, I made my way to the top. 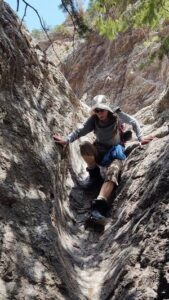 Later, when we came upon a tree nestled against huge boulders, Tom took my pack so I could inch my way down the tree without sliding into the water at the bottom. The ease with which I did it made me giggle. Each successful maneuver increased my confidence and happiness. Feeling strong and blissful, I found a way to go down a rock chute without sliding out of control. Making my way in situations that initially seemed impossible made me euphoric.

The hike wasn’t that long — only about six and a half miles— but bushwhacking is much harder than hiking on a trail. I kept up with my two hiking mates, who were twenty years younger than me and a whole lot taller. But in the back of my mind, I still wondered if this was a one-shot success. A week later, when SK called to ask if I wanted to join him for a hike, I said “Yes.” It turned out to be 11.11 miles long with an elevation gain of almost 2500 feet.

SK’s faith in my capability has made it possible for me to keep doing breathtaking, off-trail, challenging hikes, in good shape and good time. This has rendered my age, 85, mostly a number, not a measure of ability. He has given me the most memorable 85th birthday present ever.