What if constipation and aging were not synonymous? What if constipation could be the result of how you do and don’t move – at any age?   I was chronically constipated until I was 74. Then I wasn’t.  The problem was eliminated when I changed how I move my body all day long.  When I began Restorative Exercise™ at age 71, I had a history of chronic constipation from childhood. I figured it was genetic because my mother and my sister had the same problem.  I learned from Katy Bowman that “genetics” might also be repetitive habit patterns that do not support the body’s “natural” functions. In my case, it turned out I was sucking in my gut (seeking that flat abdomen look) thereby restricting the natural moves of my organs. And, I was tucking my butt – thereby throwing my body out of alignment.

Squatting to Toilet with the Squatty Potty 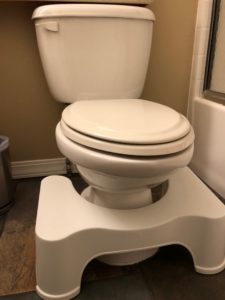 Katy talked about the benefits of “squatting to toilet” as done in different cultures. She said there were stools that could assist to achieve a squatting position while toileting. She brought our attention to the Squatty Potty  – a plastic stool designed to fit around the toilet. You sit on the toilet and put your feet up on the stool.  This position places your body in its natural squatting position for easier elimination. For me, this was not easy. After nearly 70 years of not squatting, I found it difficult to get my legs and feet high enough. So I started with putting my feet on yoga blocks or stacked books on the floor until I found a height I could reach.  Meantime, each day I began to integrate squatting into my daily routine. Each time I needed to reach something near the floor, I would squat – or try to squat. Initially, I could not keep my balance without holding on to something. And, I didn’t have the strength to stand back up unassisted.

I continued doing my Restorative Exercise practices and integrating Nutritious Movement® into my daily life. This helped in activating, lengthening, and strengthening as many muscles as possible. As a result, my body is more accepting of more movement in more ways. It has taken me almost six years to be able to squat down to the floor and stand up again. The point is, I can now do it!

And, concomitant with that, I can now get my feet up on the Squatty Potty and facilitate natural elimination. My chronic constipation disappeared three years after I began my Restorative Exercise practice.

Constipation and The Younger Generation

Constipation is not age restricted. My youngest daughter was chronically constipated as a child even though she was very active and ate lots of fruit and veggies. Recently one of our adult grandsons was visiting us at the Ranch. After using the bathroom, he commented on the Squatty Potty saying that one of his roommates had one in his bathroom. He had asked his roomie what it was for. He was told that by putting his feet up on the stool, it helped placed his body in a natural position for elimination. Grandson was amazed to learn that instead of having to struggle to eliminate, it can come easily when the body is positioned properly. He has started using it and is seeing positive changes. I, too, was amazed to learn after years of struggling and pushing that elimination should/could be easy.

I’m not saying the Squatty Potty is the answer to all constipation problems. I know that for me diet, hydration, alignment and movement are also key components to a properly functioning body. However, I am motivated to continue to use the Squatty Potty just knowing that the whole elimination process can be easier. I continue to integrate squatting into my daily life and to continue my restorative exercise practices because they work!